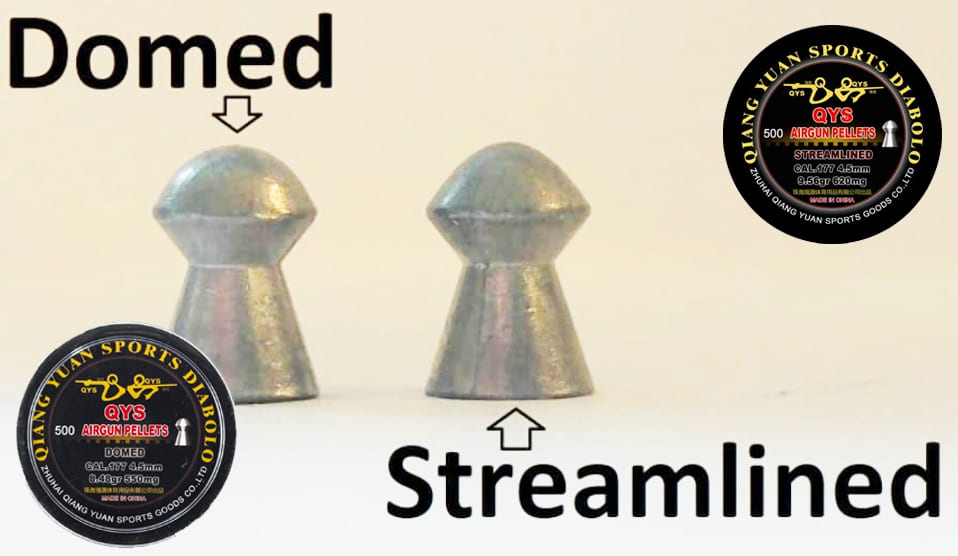 I have used each of the main types of QYS pellets over the last 12 months or so, the domed in 8.48gr, the Streamlined in both 8.48gr and 9.56gr, and most recently the flat head Training Grade in 7.8gr, all of which were in the 4.50mm head size.

All of the QYS pellets I tried have been superb quality, very smooth, consistent size and weight, clean, no swarf in the tin, and virtually no bent pellet skirts per tin. The latter has been something of a bug bear of mine with the last few tins of JSB pellets I’ve had, each with 30 or more unusable pellets.

My previous pellet of choice for the Compatto was the Rangemaster Kaiser 4.51mm 8.64gr, which are rebadged H&N Field Target Trophy pellets. I’ve been putting the QYS pellets though my UK sub 12 ft lb mk1 Brocock Compatto for the last year and they are now my go to pellet of choice, particularly the Streamline 9.56gr (heavies), no other pellet I have tried can compete with the groupings I can get out to 40 yards (and I have tried a lot of different pellets!)

The QYS Streamlind 8.48gr and 9.56gr both group very similarly, the heavier 9.56gr was lass effected by the wind but did not seem to have a lower point of impact at any range despite being more than a grain heavier than its lighter brother. This pellet is my choice for either target or pest control.

The QYS Domed 8.48 grouped similar to the Kaiser pellets out to 20 yards, but then at 30 yards and beyond the QYS Domed held a tighter group and also had a flatter trajectory.

The QYS Training Grade flat head paper punched nice one hole groups at 20 and 30 yards and I would have no hesitation in using these for pest control out to those ranges. Further than that though, I would recommend the Streamlined to ensure a clean headshot on anything smaller than a rabbit.

If you have a .177 Brocock rifle, any other rifle with a Lothal Walther barrel, or a rifle that likes 4.50mm or 4.51mm pellets, I would strongly recommend you give the QYS range a try.