So you started air gunning, shooting as a hobby in the back garden and you think you are pretty good at it. But how good do you have to be to get in the olympic team. What does it take to get from a hobbyist shooter to olympic stadium. How easy is it to go from a backyard shooter to Olympic champion, well it might be a little more complicated than you first though,

4 Qualities Of A Great Shooter

Unless you have a spare room 50m in length you need to join a club because shooting outside is completely different from indoor shooting. Also you learn a lot from the shooters and to become an olympic standard shooter we are talking minuscule measurements between winning and loosing, so no wind. This will also give you the opportunity to enter competitions to see how good you really are. Some clubs go from basic club competitions to Olympic standard, however, clubs offering Olympic standard completion are limited.

This means as you get better and better you will probably have to travel more to compete against the best.

All shooting is done from a preset distance — 10m, 25m, 50m — with athletes aiming for a bullseye on a paper target

The rifle is single-loaded in 5.6-millimetre calibre(.22)  which is used across all events.

The pistol used in the 10m Air Pistol event is a single-loaded pistol in 4.5-millimetre calibre (.117), whereas the ones used in the 25m events is a Rapid Fire Pistol in 5.6 calibre (.22) with a five-shot magazine.

If you want to get into that Olympic team then you have to get involved with British shooting.

British Shooting is the only target shooting governing body in Great Britain recognised by the ISSF, WSPS, British Olympic Association, British Paralympic Association, UK Sport & Sport England.(source) If you want to start them young get them into a club and enter one of the British Shooting events. The junior completion is for school children starts for year 6 pupils (age 11)  for 10m air pistol event.

Surprisingly even if your skill set at air gun shooting is up there with the best you have to meet the eligibility standards. These are put in place by a different governing body, UK Sport.

As the agency responsible for funding high performance sport in the UK, UK Sport takes its responsibility to promote high standards of conduct among our Olympic and Paralympic athlete and athlete support personnel population very seriously. (source)

The document is long and quite complicated in parts for eligibility, basically though you will be of good standing, have no criminal record and not do drugs. That means no recreational drugs or performance enhancing drugs.

Selection for the Olympic air gun team on your actual shooting ability.

This involves another organisation called the ISSF, International Shooting Sport Federation and competing in the ISSF World Cup Series.

The MQS (Minimum Qualification Score) is a minimum score that an athlete must have recorded at least once in the set timeframe, in order to become eligible to take part in the Olympic Games or in the Youth Olympic Games.

The Minimum Qualification Scores for each shooting event are designated by the ISSF.

The personal MQS (the Individual Qualification Score IQS) of each athlete are recorded through ISSF supervised shooting events, and each athlete willing to participate in the Olympic Games or in the Youth Olympic Games must record it before heading to the Games.

Each athlete, to be eligible to take part in the Olympic Games or in the Youth Olympic Games, needs an Olympic Quota Place, and must have obtained a Minimum Qualification Score at least once in the set timeframe.

As an example, the MQS for the 50m Rifle 3 Positions Men has been set to 1135 rings. An athlete willing to participate in the Games, must have scored at least 1135 rings during an ISSF supervised competition at least once in the set timeframe. 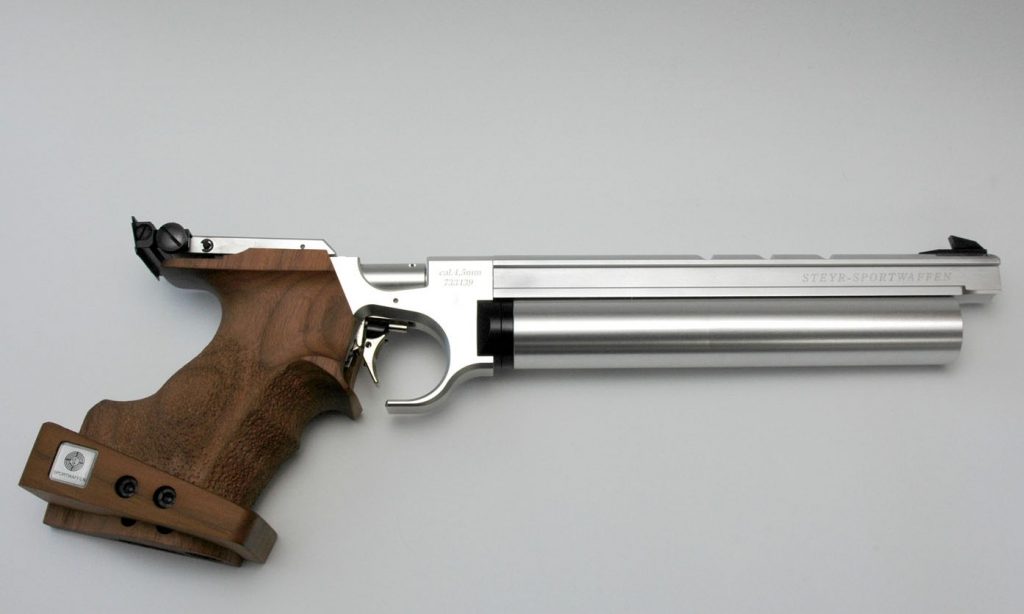 As time goes on and you start competing at a higher level in the air gun competitions your equipment needs to upgrade, The biggest expense will be your air weapon of choice, expect to pay £1500 for an air pistol worthy of competition standards. A good competition air rifle could be £2000 plus.

Special jackets or coats are used by shooters to assist them while performing by offering stability. The surface of these special jackets is non-slippery and thus, ensure a better grip, especially for rifle shooters.

The extra-padding inside these jackets negates the effects of recoil, helping shooters improve their precision. The padding on the elbows provides a firm base, which is crucial for rifle shooters in the prone position.

Blinders are used to improve focus and block objects from distracting their vision. One front blinder of a prescribed width is allowed for shooters. However, only shotgun athletes are permitted to wear side blinders or blinkers.

Fun fact: Competition rules, Shoes, ankles must not be covered by the shoe, shoes are also subject to a flexibly test. Yes it is an actual rule.

In rifle shooting, athletes fire at a target with 10 concentric circles at a fixed distance. The event is further divided into two subcategories — 50m Rifle 3 Positions and 10m Air Rifle.

50m Rifle 3 Positions: Athletes shoot at the target from three different positions — kneeling, prone and standing. Each participant fires 40 shots in each of the three aforementioned positions within a timeframe of two hours and 45 minutes. The eight highest-scoring shooters move on to the medal round.

10m Air Rifle: Shooters fire 60 shots at the target within a timeframe of one hour and 15 minutes, following which, the eight highest-scoring shooters battle it out for the medals.

In addition to the men’s and women’s categories, the 10m Air Rifle also features a mixed team event consisting of one male and one female athlete. Each team member fires 40 shots at the target within 50 minutes in the qualification round, after which five teams qualify for the final round.

25m Rapid Fire Pistol: This is a men’s only event where shooters have to fire shots successively over short periods of eight, six and four seconds. The qualification round features two rounds of 30 shots each. Eight shooters with the best score qualify for the medal round.

25m Pistol: This is a women’s-only event, and like the 25m Rapid Fire Pistol event, features two qualifying rounds of 30 shots each.

10m Air Pistol: The rules of this event are a replica of the 10m Air Rifle. It features a men’s, women’s and mixed team category. Shooters in the solo categories fire 60 shots within a timeframe of one hour and 15 minutes before the top-eight move on to the medal round. In the mixed team event, each team member fires 40 shots and the five top-scoring teams slug it out for the overall honours.

Yes it possible to go from couch to Olympic air gun competitor but it takes a lot of practice and dedication. Thats without looking at the institutions complications of getting there.